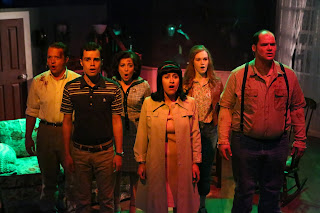 “Stephen Gregory Smith and Matt Conner breathed new life into the tired zombie trope by going back to the source – George A. Romero's iconic film – and setting it as a hard-as-nails musical. The ensemble cast conjured all the fear and loss bound into the polyphonic songs, but Zachary Allan Farmer and Marcy Wiegert were the twin cores of darkness at the heart of it all. Farmer's heroic Ben, fighting to save everyone trapped in the farmhouse, could neither comfort nor crack Wiegert's Barbra, a near-comatose woman who emerges only sporadically from her stupor to prophesy everyone's doom like a bouffanted Sybil. Director Scott Miller steadily ratcheted the tension, and then broke it all open with the single most harrowing moment to happen onstage in St. Louis this year.” – Paul Friswold, The Riverfront Times

“If you can really stand pure psychological terror, you can proceed west for the stunning power of Night of the Living Dead. . . It is, in fact, a play that had me looking over my shoulder for the rest of the night. The performances are so powerful, and so insistently based on maintaining an everyday frame of reference (in spite of an 'epidemic of murder' outside), that you carry the dread of it with you after the show, all the way to bedtime. Scott Miller: musical theater director and master of suspense. Who knew? . . . But this show is more emotionally focused than No Exit, being all about that horrible, frozen moment, that deer-in-the-headlights sense of panic, telescoped to utterly take over these peoples' lives. And let me tell you, it's nearly unbearable. Thank God it's only 90 minutes long, at least for you and me.” – Richard Green, TalkinBroadway

“One of the most frightening evenings ever at a musical. . . Most of the pre-show talk with other audience members was whether we’d need plastic sheets for the splattering blood, but instead you had to get your mind wrapped around the terror of the unknown and unexpected as this amazing story unfolds in terrifying and compelling fashion. With the unusually beautiful score and the power of these fine actor/singers, Night Of The Living Dead is one musical you don’t want to miss. Evidently this is only the second production of the show nationally but, like so many other Scott Miller productions, news of this one should spread fast and it could become the new cult favorite.” – Steve Allen, Stagedoor St. Louis

“New Line’s take is intense, creepy and full of slow-building tension. . . The show is unlike anything I have seen in musical theater. Writers Matt Conner and Stephen Gregory Smith have found a way to translate the classic horror story into music and lyrics that are just as terrifying and suspenseful as the original film. . . For fans of musical theater, this is a show that you have never seen before. And although it is a musical, the subject matter is just as serious as the film it comes from. For fans of Romero’s work, you’ve never seen it like this – and it’s a must see. Expect to feel the tension and hopelessness fly off of the stage and into the seats, and hold on until morning.” – Kevin Brackett, ReviewSTL

“A sense of dread permeates New Line Theatre's Night of the Living Dead from the very beginning, a chilling and haunting work in both expected and unexpected ways. This is the stuff nightmares are made of – a serious musical adaptation of a landmark horror film that still resonates today. I've seen the original movie countless times and yet I jumped and screamed, such is the intensity of this live theatrical production. What happens is familiar, but the fact that Scott Miller's shrewdly directed piece would pack such a powerful punch is testament to the strong ensemble who plunge us down the rabbit hole with them. Miller never resorts to cheap tricks, and the us. vs. them tension builds, almost unbearably at times, as the zombie apocalypse takes place outside the barricaded doors. . . In this Night of the Living Dead world, the terror is real, not manufactured or phony, for it is not aliens or chemically-altered monsters they are trying to survive – it is the human race.” – Lynn Venhaus, Belleville News-Democrat

“A+. I was captivated mere seconds into the production and by the time the cast took their bows I was out of breath.” – Jeff Ritter, The Trades

“A must-see for fans of daring musical theatre. . . All of the cast acquit themselves well vocally, and their intensity helps to maintain the suspense and tension of this entertaining and harrowing piece. . . New Line Theatre's production of Night of the Living Dead is a real winner, especially for those who like their horror without a constant barrage of one-liners.” – Chris Gibson, BroadwayWorld 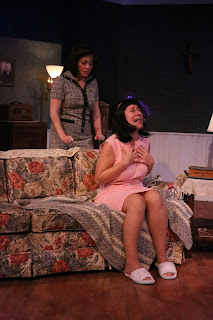 “This is no spoof, nor is it merely an homage; if you let it, it will lead you to think. . . The music—and this superbly strong cast—lift the piece into quite a different realm. . . By approaching these rather two-dimensional characters with such deep seriousness the cast leads us to consider some thoughts that make this show more than just a zombie thriller.” – Steve Callahan, KDHX-FM

“It’s a straightforward, dramatic musical that relies not on blood or guts, but on the notion that the boogeyman is actually coming in from the dark. You’re not paranoid if they’re really out to get you. . . All the familiar New Line trappings are in full force: A strong cast singing the dickens out of a complicated score, a creative set, a tight and talented New Line band, plus the usual rock-solid staging by Scott Miller. . . With Night of the Living Dead, no blood and guts are necessary. Just bring your imagination.” – Christopher Reilly, Alive Magazine

“A taut, intriguing production. . . In gritty, sobering fashion director Miller guides his players across Romero’s harrowing landscape as interpreted by Conner and Smith with intriguing and satisfying results. . . Absorbing food for thought, with a hearty portion of goosebumps on the side.” – Mark Bretz, Ladue News

“Like those old black-and-white horror films, Night of the Living Dead does more than scare – it will give you a chill. Bolstered by a score full of tight harmonies, surprising melodies, and a solid cast and crew, this regional premiere makes for another must see.” – Andrea Torrence, St. Louis Theatre Snob

“It’s not a gory show at all. In fact, we never even see the ‘others,’ the rampaging zombies outside. But it’s a nightmare. Zombies start as regular people. In this world, whom can you trust? The survivors who take shelter in an abandoned house have nothing in common except, they’re still human. Can that be enough?” – Judith Newmark, St. Louis Post-Dispatch

“In the hands of New Line’s excellent cast and creative team, it’s a thoroughly compelling and riveting production. . . Yes, I was terrified, but that’s the point of a show like this, and wow, was it done right! I was literally shaking in my seat, and the sense of terror was palpable in the audience. This is an old-fashioned suspense thriller in the very best sense. Kudos to New Line for scaring me out of my wits and showing me that a horror show well done can be an evening well spent.” -- Snoop's Theatre Thoughts (St. Louis blogger) 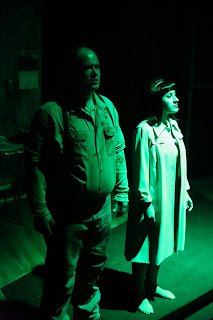 Jason Zinoman writes in his great book Shock Value, “Night of the Living Dead did for horror what the Sex Pistols did for punk.”

Even though this musical is pretty faithful to its source film, the show’s writers have reimagined this iconic story for the musical stage. They have translated George Romero's storytelling devices into the language of the musical theatre.

The result is a really original piece of theatre, unlike any other show, in its music, its lyrics, and its pacing. These aren't conventional musical theatre lyrics – they're sometimes as fragmented as the mind of the character who's singing, they often don't rhyme, and since this is a thriller, most of the songs often don't have a conventional “button” at the end to cue applause, and that builds tension.

What I've always loved about zombie movies is that the zombies serve as metaphor. Romero has made a zombie movie each decade, starting in 1968, and each film comments insightfully on the American zeitgeist, just as this new adaptation does. As Adam Lowenstein says in the documentary The American Nightmare, “The apocalypse isn't now. The apocalypse is always.”

More than anything, Night of the Living Dead and its sequels remind us of that famous line from the political comic strip Pogo: “We have met the enemy and he is us.” The film and our show ask a pointed question: Who are the real monsters here?

Kim Paffenroth writes in his book Gospel of the Living Dead, “Zombie movies imagine a scenario far worse than nuclear war or a cabal of vampires taking over the world: they present us with a world in which humans and monsters become very hard to distinguish, and therefore the moral rules that guide our dealings with other humans – it is better to suffer injustice than to commit it, thou shalt not kill, love they neighbor, turn the other cheek – are discarded as irrelevant and unfeasible. . . The horrific nature of zombies and, many would say, terrorists, is that they may force us to act as barbarically and impetuously as they do. . . Zombies dehumanize humans by eliminating their chance to experience normal feelings of grief, mortality, or sacredness, and forcing them to substitute callous, unthinking, reflexive violence.”

Zombies act as a Rorschach test. As we all do with classic fairy tales, we take from zombie movies (and zombie musicals!) what we need. The zombies represent different threats to different people, depending on what scares them most. In the documentary Nightmares in Red, White, and Blue, George Romero says, “Zombies to me could be any natural disaster. They could be anything. My stories are about the people that deal with it, don't deal with it, deal with it improperly, deal with it stupidly. The stories are about how people screw up.”

This isn't a show about falling in love or finding your path in life or making a place for yourself. This is a show about surviving till morning. There are no love songs here. No dancing. And definitely no dancing zombies!

This is a thriller.

They're coming to get you, Barbra...