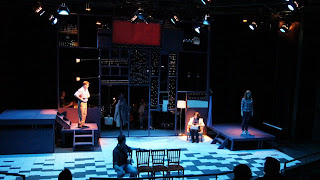 “I remember seeing Next to Normal at the Fox Theatre a while back and being impressed by the show. . . But New Line Theatre, for me, sets the local standard for musical theatre in our burgeoning arts community, and they’ve put together a superior staging of the play that hits even closer to the bone, and part of this is due to intimacy of the theatre itself, but a major reason is the fact that it’s blocked and staged in a manner that brings the message of the play clearly in focus. New Line Theatre’s production of Next to Normal is easily the best show I’ve seen this year so far. It has a terrific cast, a top notch band which is augmented with strings, and brilliant direction. This is a show you must see...” – Chris Gibson, BroadwayWorld

“Surprising and exceptional performances from the entire cast, in a story that will not settle for less. . . it’s a major leap forward in depth of characterization offered by New Line Theatre. Watch out, everybody, the ‘bad boy of musical theater’ is growing up!” – Richard Green, TalkinBroadway

“New Line Theatre presents the show in its St. Louis regional premiere with scorching intensity, dotted with dark humor. . . The opportunity to see this emotionally packed, captivating production in such an intimate space should not be missed.” – Andrea Torrence, St. Louis Theatre Snob

“The show made its St. Louis debut at the Fox Theatre. That production was fine. But Next To Normal tells such an intimate story that it’s actually a better fit for New Line, a small theater company in a small space. The play deals with serious mental illness, and New Line director Scott Miller marked out the psychological musical as his home terrain years ago, with his memorable take on Stephen Sondheim’s Into The Woods.” – Judy Newmark, St. Louis Post-Dispatch

“New Line Theatre’s Next to Normal is nothing less than extraordinary . . . For those who enjoy live theater, but have never seen the show, I can’t speak highly enough about it. The story is well written, the songs are fantastic, and the show is very honest and easy to relate to. New Line’s production looks and sounds fantastic, and continues to impress upon me the power of local theater.” – Kevin Brackett, ReviewSTL

“Directors Scott Miller and Mike Dowdy were inspired in their casting of the show. . . amazing acting and singing by all members of the cast. . . an affecting and thought-provoking night of theatre.” – Laura Kyro, KDHX 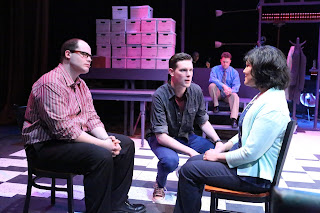 “Next to Normal is a cerebral, up-close-and-personal account of mental illness, with a cast of six and a small accompanying orchestra that in New Line’s presentation consists of a half-dozen musicians. Seeing it at the Washington University South Campus Theatre accentuates the personal nature of the work in a way the sprawling touring production could not do. . . New Line’s artistic director Miller has a keen eye for what makes a particular musical work best, often finding hidden gems and mining their potential to sparkle. Even with this Pulitzer Prize-winning show he’s been able to accentuate the delicate emotions that are laid bare in Next to Normal.” – Mark Bretz, Ladue News

“New Line Theatre has brought an intimate and more accessible production to their stage and everything about it is outstanding. Kimi Short is simply sensational in the difficult role of Diana. . . The packed house on opening night leapt to their feet after the final strains of ‘Light’ to show their appreciation for a talented cast and crew and a most brave production.” – Steve Allen, StageDoorSTL

“New Line Theatre has crafted an edgy, thought-provoking production that does not sugarcoat the pain of a bi-polar disorder sufferer and her family. . . I hope the St. Louis theater audience gives Next to Normal a try. It isn't a simple way to pass a few hours, but like any challenging experience it is more rewarding for the difficulty.” – Jeff Ritter, The Trades

“This production encapsulates everything perfect about live musical theater. Pulled into the dysfunction of the family so perfectly, you feel as if there needs to be an empty seat at the dinner table for you. A set that is fairly minimalist and yet is disconcerting and haunting by itself, before a single actor has walked on stage sets the audience off kilter and prepares them to enter the world of the story dysfunction. The characters are priestly in the way they become arbiters between the physical and metaphysical crag the story treacherously sets as its path. The experience perfectly completes the circuit between stage and audience. . . There is no better description for this show than to refer to it as sacramental.” – Kevin J. Bowman, Dispossessed

“The production of the Pulitzer Prize winning musical about mental illness, Next to Normal, has been given a strong staging by New Line Theatre, where this intimate drama works much better than it did last year at the Fox.” – Bob Wilcox, Town and Style 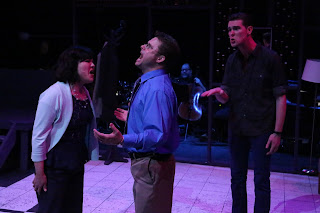 When we produced High Fidelity last season, we realized that the show places us squarely inside Rob’s head. He narrates his own story and we hear everyone in his life in the musical vocabulary of Rob’s favorite recording artists. We get the story only from Rob’s point of view, which is very organic to the novel the show was based on.

With Next to Normal, we’re not really inside Diana’s head, since we see parts of the story that Diana is not present for. But we are inside her world, a world where things don’t make sense as often as they do. When Diana suddenly hallucinates her new doctor singing like a rock star, we share that hallucination. When Diana slips into delusion, we experience that delusion with her.

One of the show’s central points is that mental illness affects not just the person suffering from the illness, but also everyone around them – in this case, including the audience. The story’s other big point, an existential view that it shares with Passing Strange, is that everyone has his own journey and his own destination – or as Passing Strange puts it, his own Real. You can’t follow someone else’s path, because their Real is different from your Real.

Diana has to find her path, but throughout much of the show, everyone else is telling her what that path should be. Like Company, the end of Next to Normal is ambiguous. Diana takes action, but we have no idea what the results of that action will be. Will she be better? Worse? Those answers aren’t the point of this story. The point is that Diana finds her path. Just like Bobby in Company. 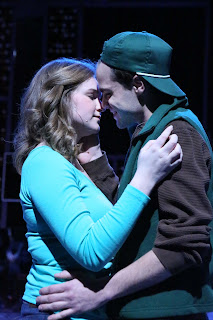 Like many of our shows, Next to Normal is a Hero Myth. Actually, it’s a double Hero Myth, because Natalie travels through her own Hero Myth as well. Each of the women are forced into their journey, encounter obstacles, pick up companions along the way, do battle with an “Evil Wizard,” and they each find new wisdom to point them forward.

Most musicals used to be love stories because musical theatre is an inherently emotional storytelling form. But as musicals became more personal and as our culture changed, musical theatre began shifting to the Hero Myth, every bit as emotional a journey as any love story.

As I’ve argued many times, people don’t go to the theatre (or movies) for escape, despite what the shallow types will tell you; they go for connection. To make sense of the world around them and their own lives, to be reminded that we all go through essentially the same trials, that we are not alone.

Sondheim says the point of art is to make order out of the chaos of our world. Art selects from life, focuses, juxtaposes, reveals, magnifies, all in the service of telling a meaningful story that helps us navigate the rough terrain of being human in the 21st century. You don’t have to be bipolar to see your own daily struggles in Diana’s more extreme struggles. And that’s why storytelling is important to the culture. And why we make theatre. And why lots of people find Next to Normal so genuinely powerful and incisive. Enjoy the ride.