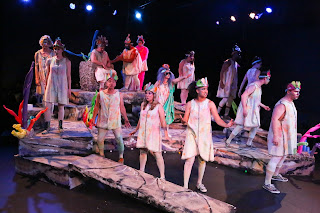 “New Line has long been home to weird shows – and this one, from the creators of Urinetown, might be the weirdest yet. Single-cell organisms, singing and dancing in the primordial ooze, more or less simultaneously discover love and dynastic tragedy. The voices are terrific, and the tie-dyed costumes are a hoot; who knew microbiology could be so entertaining?” – Judith Newmark, St. Louis Post-Dispatch

“The production is absolutely spellbinding. . . For those who are familiar with New Line, Yeast Nation features an all-star cast of actors. . . Yeast Nation is probably considered odd by Broadway standards, and most likely why it never found a home there. But that is more the reason to love it, as it epitomizes the creativity we yearn for when discovering new art. The show is very smart, and surely benefits from a second viewing to truly appreciate all of the clever writing. Yet at the end of the day, the sights and sounds will have you captivated – all while having a lot of fun.” – Kevin Brackett, ReviewSTL

“It’s a big goofy summer musical, delightfully performed, full of silly pastiche song and dance, that’s somehow just a little too snarky and ironic for the Muny. . . Come for the nonsense, stay for the soaring musical artistry. . . You haven’t heard Motown and doo-wop spoofs till you’ve heard them in the swoon-worthy richness of a New Line show.” – Richard Green, TalkinBroadway

“New Line Theatre’s current production of the show is directed by the accomplished team of Scott Miller and Mike Dowdy-Windsor, and it moves from strength to strength. The cast is sharp, Rob Lippert’s set and lighting design are both attractive and effective (sitting in The Marcelle is like being inside a human-scale, high-dollar aquarium), and most importantly, I cared about some of these genderless, biologically identical yeasts and their plight. Personal investment is the ultimate goal of every show, but it’s a big ask when you’re talking about yeasts who all share one name.” – Paul Friswold, The Riverfront Times

“Is it New Line turned up to eleven, zany and shocking and well-acted with music and songs that are, dare I say it, infectious? Yes, indeed! Yeast Nation is easily the most bizarre musical you’ll see this year and perhaps for many years to come. . . and yet it completely works. . . There is an incredible amount of live theatre in St. Louis, and some companies are producing challenging and decidedly different fare. With Yeast Nation, Scott Miller, co-director Mike Dowdy-Windsor and the whole New Line crew remind everyone why they are the bad boys of musical theatre. Yeast Nation is the funniest cautionary tale you’re likely to ever see. The basic premise alone of yeast reminding humans that in many ways we aren’t as evolved as we think we are should make this a hot ticket.” – Jeff Ritter, Critical Blast 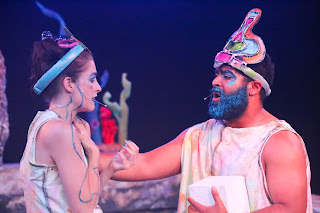 “New Line Theatre embraces the odd and evolving world of Yeast Nation, giving it vibrant color and effective performances that are delightfully engaging and thoroughly satisfying. You might learn a little science if you listen closely, but you’re sure to leave the theater with a smile, a melody in your head and a new appreciation for our distant neighbors those salt-eating yeasts.” – Tina Farmer, KDHX

“It’s something doubtless unlike anything most audience members have ever seen, albeit with its own quirky charm. . . Directors Scott Miller and Mike Dowdy-Windsor and their performers bring out the zany silliness of the concept. . . New Line’s production has fun stretching out the show’s central joke, showing how far humanity has come and how far it may yet need to advance.” – Mark Bretz, Ladue News

“In typical fashion, the New Liners bring us a wonderful production full of energy and singing and acting skills that are stellar. . . The usual outstanding ensemble does a wonderful job in backing up all this insanity. . . A nice way to while away a couple of hours with the enormous talent on stage, some good music and a few laughs along the way.” – Steve Allen, Stagedoor St. Louis

“Yeast Nation is a fun, funny show with a theme that’s novel and a message that’s more than timeless. At New Line, it’s given a production that emphasizes the comedy, musicality, and most of all, the heart of the story. . . The musical elements, as is usual for New Line, are top-notch. . . this production is a lot of fun, and another example of the strength and ingenuity of New Line Theatre.” – Michelle Kenyon, Snoop’s Theatre Thoughts 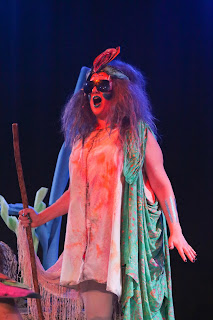 But it occurred to me a while back we had never produced a bio-historical musical. I don’t know how we missed that, but we had! Luckily for us, Greg Kotis and Mark Hollmann, the mad geniuses behind Urinetown, have been nurturing and developing another wild, dark, comic show; and can you believe it, it’s a bio-historical musical!

I mean, what are the odds?

Little Shop of Horrors, Bat Boy, and Urinetown taught us the First Commandment of the neo musical comedy: the more seriously you take it, the higher the stakes, the funnier it gets. And with Yeast Nation, Kotis and Hollmann have put that concept on steroids. The central joke here – portraying single-celled yeasts as a human community, with a history, culture, government, alliances, palace intrigue, etc. – gets even funnier because the story is presented as straight-faced, classical tragedy, with obvious, intentional parallels to both Antigone and Macbeth.

Except they’re all yeasts.

What I love most about this writing is that the crazy dialogue and lyrics really do come from the point of view of yeasts! The metaphors are metaphors yeasts would use (if yeasts used metaphors). You can just picture “Stasis Is the Membrane That Keeps the Yeasts Together” embroidered on a yeast sampler hanging over a yeast mantelpiece. This show is only the latest proof of the old storyteller’s adage – the more specific the details, the more universal the connection.

And if it’s not already funny enough that the protagonists of Yeast Nation are literally single-celled yeasts, or that our musical is set three billion years ago on the floor of the ocean, or that these yeasts have emotions, community, and power struggles, or that the two central plot lines of our show parallel Antigone and Macbeth...

If all that isn’t enough... there’s yet another very funny element that will probably pass right by most of our audience. What may be the funniest aspect of this epic, twisted fable is that some of the weirdest details of our story are biologically accurate.