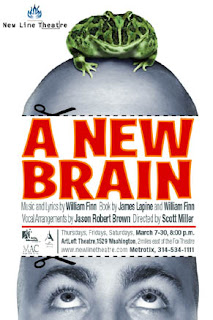 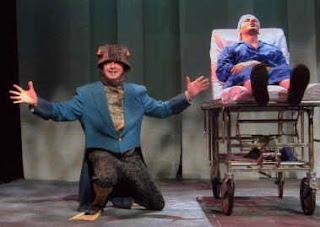 “A delightful, albeit dark comedy. Scott Miller’s inspired direction of this sung-through musical keeps the show galloping at a brisk pace with restful interludes. . . Todd Schaefer, who plays the gay lover of our angst-ridden lead, has an outstanding voice. . . Lovely of voice, Mo Monahan brings enough compassion to the role to mitigate Mother’s overbearing trait. . . Terry Meddow’s energetic portrayal of the bug-eyed Bungee suggests that, despite appearances, it isn’t easy being green. Karen Page gives a stellar performance as the Homeless Lady who shuffles in and out of Schwinn’s consciousness. . . The remaining cast and 4-piece band do an exceptional job with a score, the complexity of which demands consummate skill and precision. . . Oscar Hammerstein gave us ‘a bright golden haze on the meadow.’ William Finn recreated the bright golden haze of the MRI scanner which swallowed him up during a diagnostic exam. Here’s one show you’re unlikely to find on any other stage in St. Louis.” - Sheila Schultz, KDHX-FM

“Scott Miller’s New Line Theatre is all about presentations that are daring, different or deliciously skewering the conventional. . . There’s enough to appreciate in Finn’s inspired whimsy, and New Line’s zestful interpretation by its capable cast under the judicious care of director Scott Miller, to make A New Brain a pleasing, if offbeat and quirky, selection.” - Mark Bretz, Ladue News

“[Composer William] Finn . . . is known for stretching the boundaries of the genre. . . Deborah Sharn is engaging and brings energy and depth to Rhoda, Schwinn’s agent . . . The always excellent Terry Meddows does a fine job as Gordon’s boss, the man-frog Mr. Bungee. The audience most enjoys the entertaining Nicholas Kelly as the self-effacing ‘nice nurse’ Richard. . . I’m glad Finn recovered, and he deserves credit for experimenting with the form.” -- Brian Hohlfeld, Riverfront Times

“Terry Meddows is bright as Mr. Bungee, who owns the TV show, and there is splendid work from Nicholas Kelly as Richard, the night nurse. Deborah Sharn is outstanding as Rhoda, [Gordon’s] good friend, and Karen Page and Ken Haller are often entertaining.” -- Joe Pollack, KWMU-FM 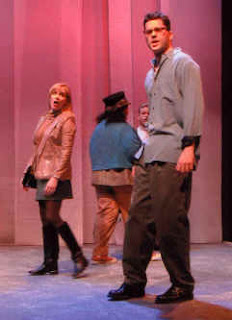 As many of your have already figured out. I'm bored with old-fashioned conventional, linear storytelling, where each scene follows logically and inevitably from the one before, We get enough of that on TV and in the movies, Do we really need that in the theatre, too? Is that really the only way, or even the most interesting way, to tell a story? Since TV and movies do naturalism better than theatre, shouldn't theatre focus on what it does best. namely, imagination and emotion?

A New Brain certainly rejects linear storytelling, This show literally puts us inside the mind of Gordon Schwinn, a theatre composer whose brain isn't working right. He has an arterial venous malforntation in his brain which bursts, causing his brain to malfunction in surprising and (for us) very funny ways. Easily two-thirds of the show happens inside Gordon's mind in the fonn of fantasies, dreams, hallucinations, and a coma. As we watch the show, we suffer through the same mind-bending disorientation as Gordon, sometimes confusing, sometimes wildly entertaining, sometimes disturbing, constantly moving in and out of reality. We go on his surrealistic journey with him.

We see how Gordon perceives the people in his life, what he thinks of himself and his career, how he feels about death. all of it. sometimes in explicit terms, sometimes in metaphoric tenns, sometimes in tenns so bizarre and neurotic and outrageous you have to just throw your hands up and laugh.

Don't expect everything you see tonight to make sense. It won't But when the roller coaster ride is over, the pieces will all fit together, At the end of the show, when Gordon is finally able to write the "Spring: song he's been trying to write since the first scene, you'll see why this journey was one worth taking.

Almost everything that happens in the show actually happened to William Finn, who wrote A New Brain. Three days after winning a Tony Award for Falsettos, Finn collapsed and was rushed to the hospital where he was diagnosed with this life threatening brain disorder, Luckily, he came out of it as healthy and as crazy as ever, and once he was back home, he turned his adventure into a musical. But, as you might guess considering the subject matter, it's a musical unlike any you've seen before.

Especially since the terrorist attacks on September 11, the homeless lady's admonition that "We live in perilous times" is more potent than ever, and the show's warning to live life to the fullest because there's no telling what tomorrow has in store is a lesson we need now more than ever. Maybe in this new world in which we now live, we all need a new brain – a new way of thinking about our lives – and hopefully this show can be our call to action.