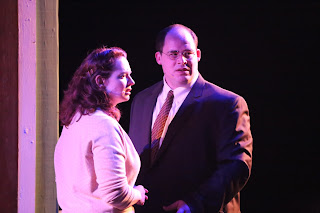 REVIEWS
“New Line Theatre’s Atomic is thrilling. . . It is a complex story that presents multiple viewpoints on the purpose of applied science, the ethics of war, the depths of the human conscience and the dangers of bureaucracy. That’s a heavy load for a musical to carry, but New Line Theatre’s current production of the show makes it look effortless. . . What could be a play bogged down in conceptual arguments is instead a very human story about our best and worst tendencies as a species. Ambition, curiosity and altruism jostle with overweening pride, blind obedience and vengeance.” – Paul Friswold, The Riverfront Times

“Full of surprisingly humor and heart, this is great theatre, and I could tell from the discussions that happened during intermission, one that will surely provoke a lot of lively debate. It’s essentially must-see entertainment that will have you pondering many of its myriad of aspects and points of view long after the lights have dimmed. . . It’s the thoughtful and touching book and lyrics by Danny Ginges and music and lyrics of Philip Foxman that will really grab you. And, also the performances of a splendid cast. . . Atomic is an artistic triumph! New Line Theatre has succeeded in putting together a production that does this piece the justice it deserves. There’s warmth, humor, tension, and pathos to be found here, and it’s all been done with precision and care.” – Chris Gibson, BroadwayWorld

“Atomic is a musical blast with persuasive power. . . A fascinating, riveting examination of the moral quandaries faced by a group of brilliant scientists whose pursuit of knowledge had terrifying consequences. . . A musical score that fuses driving rock with pop melodies and well-placed ballads makes Atomic a sobering, compelling and engrossing story that blends facts with philosophy and morality in a reflective and intriguing way. . . this revised version of Atomic is gripping, gritty stuff...” – Mark Bretz, Ladue News

“History comes to life with a strong cast and an intriguing script in New Line Theatre’s production of Atomic, a musical account of the Manhattan Project. . . Atomic is a strong production and audiences who appreciate theater’s ability to spur conversation may particularly enjoy this thought-provoking show.” – Tina Farmer, KDHX

“A long forgotten but important historical figure gets his due in the zealous rock musical Atomic, which bursts with passionate performances, an expressive score and combustible conversations. New Line Theatre’s smart production features a synergetic ensemble fully committed to telling this complex, fascinating story about Leo Szilard. We Americans should know of him, but unfortunately many of us don’t. Call this thoughtful, accessible work by Australian book writer/lyricist Danny Ginges and composer Philip Foxman a noble public service and a surprising, welcome eye-opener. . . Atomic is a highly dramatic equation that adds up to an insightful and reflective show, allowing New Line to reveal another facet of its range, this time focusing on science while projecting a very powerful, bigger picture.” – Lynn Venhaus, Belleville News Democrat 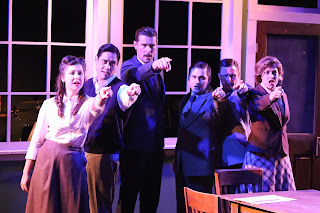 “If you think the theatre season in St. Louis is pretty much over when spring rolls around, think again. Atomic is ‘the bomb’ and well worth checking out. . . This cast is, quite frankly, ridiculously talented. I’d be happy to watch a production with any one of these fine actors, but all eight at once is a must-see event. . . Towards the end of the first act, the crowd started cheering and whistling after each song...” – Jeff Ritter, Critical Blast

“It’s the most cerebral rock musical New Line has ever staged. It might be the most cerebral rock musical ever written. That’s a compliment to the show, its performers and its directors, Scott Miller and Mike Dowdy. . . Atomic is a dark play, in keeping with its subject matter. But when the Enola Gay reaches Hiroshima, lights seem to explode above and all around us. That’s the darkest moment of all.” – Judith Newmark, St. Louis Post-Dispatch

“You really have to give credit to the authors on one major point: they bring clarity and thoughtfulness to the complex problems of making the bomb, the terrible pressures to complete the task, and the social issues raised by all of this. Even in act one, great moments emerge again and again. . . There’s really no shortage of compelling performances, but each of their greatest moments come when they’re reduced to utter simplicity, in grief or ponderous shame, or in the wake of betrayal. . .Here, science is the language of the future, holding out the promise of the endless power of the atom. But these scientists will only be listened to when the talk turns to mass-murder. In New Line’s staging, it’s a time of impossible dreams and impossible choices.” – Richard Green, TalkinBroadway

“Directors Scott Miller and Mike Dowdy have energized the story by casting powerful singers and actors and bringing out the heart of the story without getting too sappy or preachy. . . As always, New Line’s musical maestro, Jeffrey Carter has put a splendid band together. . . Rob Lippert’s set and lighting design is spectacular.” – Steve Allen, Stagedoor St. Louis

“it’s an interesting show, far more about moral dilemmas than anything else, a good portrayal of near-unanswerable questions about justification for nuclear war. How far do we go, and what does it take to stop us? . . . It’s a good score, melodic and generally quite winning. . . Not easy theater. But quite interesting and very different.” – Ann Pollack, St. Louis Eats & Drinks

“Atomic is still early in its life, only having had a handful of stagings after an off-Broadway run a couple of years ago, and though New Line’s run is over, it’s exciting to know that contemporary shows like this are being produced right in our own backyards.” – Andrea Torrence, St. Louis Theatre Snob

“An extremely well-staged, well-cast, compelling piece of theatre. . . New Line’s production of Atomic is the show’s St. Louis debut, and only the fourth overall production of this intense, intriguing show. In the hands of directors Scott Miller and Mike Dowdy, along with the first-rate cast and crew, the show is a fascinating examination of the history of nuclear development as well as a stirring examination of the moral dilemmas inherent in the project. It’s a story that’s sure to provoke much thought and conversation.” – Michelle Kenyon, Snoop’s Theatre Thoughts 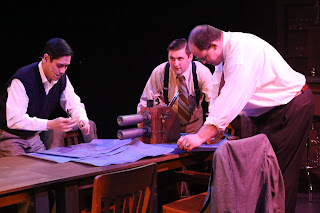 DIRECTOR'S NOTES
New Line’s production of Atomic is the show’s fourth, after its premiere in Australia (where both writers are from), a brief run off Broadway, big rewrites, and then a production in Michigan.

I’ve realized as we’ve worked that this isn’t the kind of smartass, ironic story we usually tell, and I’ve had to be careful not to fall back on habits that better suit a different kind of show. There are moments of pretty dark irony here and there, but overall this is a very sincere, very earnest script, because these physicists take their work and the questions around it very seriously. And the stakes are astronomical.

The reviews of the show off Broadway often said this was a musical about the Manhattan Project, but that’s not exactly true. This show is about the morality and moral questions swimming around the making of the bomb. This is a morality tale, not a history lesson.

This is a show about Dangerous Ideas. Pandora’s Box. Which is why it has to be a rock musical. This is a story about big emotions, big rebellion (in various forms), big questions, and big moral complexity. Rock is the language of rebellion, of danger and wildness. What other musical language could adequately portray these people, their emotions, their rage, and their fear?

The energy and intensity of this story demand rock and roll.

I’ve realized that Atomic is not a Hero Myth story, as so many of our shows are. This is a Frankenstein story. Leo and his fellow physicists create a monster, which they lose control of, and it rampages through the world killing people.

The show’s writers have created a dual personality for this show, part Brecht, part contemporary drama. That duality is present in the story itself, in the battle between science and government/military, in the conflicted emotions of these characters, even in our own moral assessment of the atom bomb as we watch this story.

Maybe the coolest thing about Rob Lippert’s set for this show is that our audience watches this gripping, morally complex drama, with the other half of the audience – with America – as backdrop.

Like 1776 does, Atomic takes these historical figures out of the history books and gives them full, rich, complicated humanity. I can’t even imagine having to grapple with questions like this...

As with every show, my only job here has been to understand what Danny Ginges and Philip Foxman wrote, and then figure out how to make that as clear as possible to you, our audience. Not to impose a “vision” or anything on it, just to follow the script and score wherever they take us. This is good storytelling and we just had to trust it.

We hope you find this story as powerful as we do.