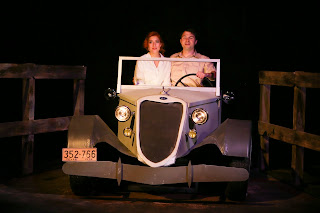 “If you live in New York or London, you enjoy lots of opportunities to see new shows. . . In St. Louis, we have those opportunities as well – mostly because of Scott Miller, the artistic director of New Line Theatre. New Line has earned considerable attention over the years, originally for its scaled-down treatment of established musicals and in recent seasons for Miller’s smart presentation of rarely staged shows that are worth another look. Bonnie & Clyde is the latest of these offerings. . . The production’s directors, Miller and New Line associate artistic director Mike Dowdy, tell this morally bankrupt story with plenty of flair. Matt Pentecost, as the sweet-faced Clyde Barrow, and Larissa White, as slithery Bonnie Parker, deliver their songs with bold, in-the-spotlight bravura. . . The whole score is treated well by the bluesy combo under Jeffrey Carter.” – Judith Newmark, St. Louis Post-Dispatch

“You have to check out New Line’s current production of Bonnie & Clyde. You’ll be blown away by how engaging the story and characters are, and you’ll be humming the score as you walk out the doors because it’s just so incredibly and infectiously catchy. . . Directors Scott Miller and Mike Dowdy interpret this piece with considerable style and energy, and the entire cast is fully invested in their vision. Musical Director Jeffrey Richard Carter’s contributions are inestimable, as Frank Wildhorn’s delicious, genre-hopping, syncopated score gets completely stuck in your head. . . Don’t miss out on a chance to see New Line Theatre’s brilliant and tuneful production of Bonnie & Clyde. I guarantee you’ll be singing, whistling, or humming one of the songs from the score before the night is through.” -- Chris Gibson, BroadwayWorld

“New Line has once again seen the potential in an unappreciated show – and has given it a new and glorious life! . . . Bonnie & Clyde is a cool show, and yet another surprise from the company who knows how to keep their choices interesting. The entire cast does a terrific job in this public enemy period piece, bringing the story you think you knew to life through music and dance as only New Line can.” – Kevin Brackett, ReviewSTL

“A fast-paced, toe-tapping romp through the lives of these two outlaw lovers who captured the public’s fascination during America’s depression and made heroes out of two inept, small time thieves who eventually became killers as well. . . . Directors Scott Miller and Mike Dowdy bring it all together for another entertaining and fun-filled show. . . an evening that is full of surprises and multiple magic moments.” – Steve Allen, Stagedoor St. Louis

“A joy ride of infectious music . . . With fine source material, directors Scott Miller and Mike Dowdy harness the energy and intelligence of their cast, coupled with the crackling chemistry between title performers Larissa White and Matt Pentecost, for an evening of engaging and thoughtful entertainment. . . Perhaps New Line has mounted a superior production to the Broadway version, because this buoyant, captivating rendition makes it puzzling to understand why Bonnie & Clyde met such a quick death on the Great White Way.” – Mark Bretz, Ladue News 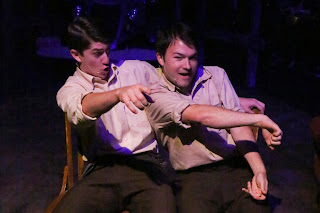 “Bonnie & Clyde starts off New Line Theatre’s 24th season with a bang and some exciting new stars, notably Larissa White, Matt Pentecost and Brendan Ochs as well as giving relative newcomer Rey Arceno another opportunity to shine. If you haven’t checked out a New Line show yet this would be a great place to start.” – Jeff Ritter, Critical Blast

“A sure-fire hit. . . Bonnie & Clyde is New Line’s latest project, and with its excellent cast and dynamic, colorful staging, it proves to be a surprisingly resounding success. . . I’ve come to expect excellence from New Line, and my expectations have been met and exceeded by this impressive and memorable production. I like being surprised by great performances, and there are quite a few in this show. Bonnie & Clyde is a show that’s compelling even as it’s unsettling and not a little disturbing, as two charismatic but unashamedly corrupt people rise to prominence quickly and then, even more quickly, fall. It’s a truly memorable production.” – Michelle Kenyon, Snoop’s Theatre Thoughts

“Action alternates with introspection in the book by Ivan Menchell, as these folk heroes, their families and crime sprees are vividly brought to life by a superb cast. . . Bonnie and Clyde’s two years together are now part of American folklore, and New Line’s take makes the characters indelible.” – Lynn Venhaus, Belleville News-Democrat

“Fast-paced and lively (though it begins with a pair of gruesome deaths), the musicalization of these famous bank robbers delivers a reckless kind of delight, almost in spite of itself. . . [It] captures the deep moral friction of Texas and the suffering of the Depression, bristling all the while with the sharp elbows of defiance. It’s full of fine love songs (appropriate to the era), and songs of rebellion and dire warning too. But it’s also a tragedy without remorse, and a comedy full of consequence. . .” – Richard Green, TalkinBroadway

“Painstakingly directed by Scott Miller and Mike Dowdy, the New Line cast brings real soul to Frank Wildhorn’s rockabilly- and gospel-inflected score. . . With lyrics by Don Black and book by Ivan Menchell, the performance is rounded out by a strong ensemble cast . . Rob Lippert’s smart set and creative lighting combine with several provocative directorial touches by Miller and Dowdy. . . This streamlined version of the tale makes for a fun, albeit gory, night of theater. . . This Bonnie & Clyde should be on anyone’s Most Wanted list.” – Malcolm Gay, The Riverfront Times

“This production was fascinating to watch. . . the performances were powerful . . . When a production of this caliber can make me care less about playoff baseball, that is saying something.” – Jim Ryan, BoomSTL

“Tight and strong. . . While the huge appeal of the underlying story of Bonnie and Clyde largely escapes me, when it's treated as well as it is here, it does make a good show.” – Bob Wilcox, KDHX

“What better local company to snatch this show up and give it a fresh perspective, as it’s done many times in the past, than New Line Theatre? . . . Under Jeffrey Richard Carter’s musical direction, the New Line Band is tight, handling Wildhorn’s score of depression-era blues, folk, gospel and rockabilly superbly. . . These details, along with Scott Miller and Mike Dowdy’s precise direction, work together seamlessly. Seeing this production makes it hard to understand why it didn’t last longer in NYC.” – Andrea Torrence, St. Louis Theatre Snob 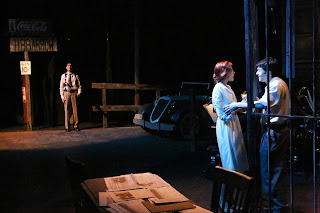 Why do we all know the names Bonnie and Clyde? Hype.

Bonnie and Clyde weren't particularly competent criminals. They made a lot of mistakes. They left a lot of robberies with nothing to show for it. And they only rarely robbed banks; mostly, it was little mom-and-pop grocery stores and gas stations, often leaving robberies with as little as five or ten dollars.

So how did these half-assed kid-criminals get to be as famous as the “professionals” like Al Capone or John Dillinger? The media. There were two ways to be famous in America in the 1930s. You had to get in the papers or on the screen. In the opening number of Bonnie & Clyde, Bonnie chooses the screen, and Clyde chooses the papers. As it turned out, what really did the trick was Bonnie's poems – the newspapers published anything she gave them, and that's ultimately what made them stars.

Personally, I think the main reason they became more famous than other gangsters is that they were Just Two Wild Kids in Love. None of the other outlaws of the period had a story like that. (Can’t you see Mary Sunshine from Chicago writing about them?) Just imagine Bonnie and Clyde in today's über-saturated media environment. They'd be uploading videos to YouTube twice a day and live-tweeting their robberies. And the FBI would be tracking the GPS on their car because Clyde hadn't thought about that... 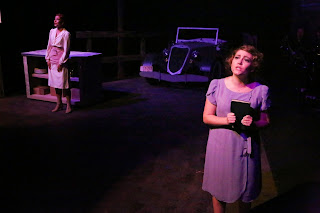 This version of the famous story leaves out a lot of things and people, because this isn't historical biography; this is a fable. And the moral of the fable is: A broken country creates broken people with broken values. Like Assassins, this is a show not about historical accuracy as much as emotional authenticity. Documentaries focus on details; this story is about the emotional state of our country during these dark times.

This isn't a love story, either; it’s a story about the unintended creation of criminals. The horror and despair of their lives have molded these damaged, dangerous kids, who can see only one crooked path to any kind of happiness or security in this dystopian America; and they're ill-equipped either to legitimately make their own way, or really, even to be all that good at crime. Because they're essentially children. Emotionally, socially, morally, psychologically, everything but physically, they're children. Continually fed a religion that no longer seems relevant, Bonnie and Clyde have no moral compass, no role models, just the hell-for-leather all-American pursuit of happiness.

At the expense of everyone else. That part Jefferson left out. Clyde brushes up against morality a couple times, but it baffles him. That part of him is broken. Or was never formed. You might say our story tonight is a horror fable, as scary as anything the Grimm Brothers gave us, about how America produced these two monsters and how they would be abandoned by their makers: a socio-economic Frankenstein story of the Great Depression, and a cautionary tale for us today about ever increasing income inequality...