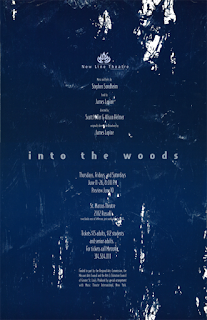 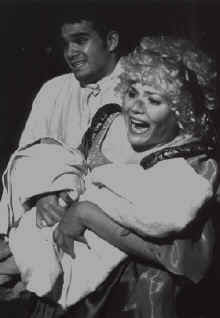 “With Into the Woods, [Scott Miller] continues his experiments in proportion. His intimate production of Stephen Sondheim’s sophisticated fairy tale reduces the Broadway hit to a nursery scale, befitting both its subject matter and its psychoanalytic viewpoint. The production . . . makes the most of the St. Marcus Theatre, turning its small size into an asset. . . Into the Woods brings together an exceptionally consistent cast.” – Judith Newmark, St. Louis Post-Dispatch
“You can savor those words and music in what may be New Line’s finest production yet. . . The cast plays with smart assurance, without a weak link in the chain. . . The whole production turns these old tales into adult versions rich in wit, music, and emotion – the most satisfying kind of entertainment.” – Bob Wilcox, The Riverfront Times
DIRECTOR'S NOTESAt each stage of his life, a child may take different lessons from a single fairy tale. Each time he hears in it some new insight or lesson, depending on his needs at that moment in life. Perhaps at one moment, the child will learn that we must follow our parents’ instructions when he reads or hears Little Red Ridinghood. At a later moment, he may take from it the idea that life is full of dangers and adventures, but that no matter how scary it may get, we generally come out all right on the other end of even the darkest moments.

But fairy tales are for children. Well, maybe. Wouldn’t it be foolish to assume that just because we’re adults, we have nothing left to learn? In fact, Into the Woods is a fairy tale for adults. Real fairy tales divide the world into Good and Bad, with no gray area in between. Real fairy tales leave no room for moral ambiguity. Into the Woods takes us, as adults, into the world of fairy tales, and invites us to try to navigate this world. But we know too much and as that world changes us, we change it.

We know that in the real world a wedding is not the end of the story, that it is not a guarantee of happiness. Going into the fairy tale woods with the knowledge we have will shape that world into something very different. We know that the people who claim to be doing good, aren’t always. A child might accept the idea that killing a giant is unambiguously good. But we live in a world with war, abortion, mercy killing, and capital punishment. Killing suddenly isn’t all that clear-cut. Some people would say killing is never good. Others will point out that killing is sanctioned in the Bible. Which are we to believe? There are no easy answers.

Into the Woods is a very special show. In Act I, we are presented with a (relatively) conventional fairy tale that ends with a Happily Ever After. But in Act II, that world of black and white is dissected, deconstructed, examined more closely. We see that getting our Happily Ever After, getting what we want sometimes necessitates acts we may not be proud of, acts that have unforeseen consequences down the road. When we go into these woods, we bring our adult world with us, where people sometimes lie and steal.

We’ve already learned all those lessons about honesty, bravery, and obedience (though we may not always practice them). Into the Woods teaches us lessons--things some of us adults have not yet learned--about consequences, about responsibility to the community. (Maybe Clinton needs to see this show.) “No One is Alone” isn’t just a song that promises support in our time of need; it’s also a song that cautions us to be aware of how our actions affect others, reminding us that we do not live in a vacuum. One line says, “Careful – no one is alone.” It’s this “careful” that raises this show out of the ordinary.

Some people have criticized Into the Woods for being too preachy, for spelling out its lessons too completely. Real fairy tales never explicitly state their morals, leaving that work for the child to do. But this is a fairy tale for adults, and, as we all know, adults are far less perceptive than children.

REMEMBERING INTO THE WOODS

I loved doing this show. Absolute fun. I was nervous about singing, as the only singing I had really done was karaoke, but the company and environment were so incredible that I felt at home. I remember Justin and I had the arduous task of transforming Karl from the Wolf into Cinderella’s Prince. This entailed starting backstage, stripping him of the Wolf vest, racing upstairs, wiping away sweat and make-up, running through St Marcus’ Church, helping him into Prince clothes, and then downstairs for his cue to enter behind the audience. Thanks, Scott. Great idea. Luckily we made it every night. During the run of the show, I developed a wonderful bruise on my left shin and scars on both wrists from falling. It wasn’t so much falling as slamming myself into a wooden riser. The audience reaction was more than worth it, especially one night, when an older couple gasped “Oh dear! I hope he’s all right!”
– Sean Pritchett, “Rapunzel’s Prince”

The show was Into the Woods. I was Cinderella’s Dead Mother, the Giant, and Granny. The cast did a lot of marching through the audience. Lots of bobbing and weaving – single file, so as not to run into each other. I was Granny at the time of The Incident. All I remember is two Princes coming at me at the same time. I tried to “weave” out of the way, but in my struggle to remember those damn Sondheim lyrics, I had forgotten about the ramps which extended out from the stage. Yes, I avoided the Princes, but not the ramps. My feet were caught under the ramp and down I went. I believe St. Louis experienced a 5.3 on the Richter scale that evening. I managed to get myself up and march through the audience, singing and smiling. Instantly, my feet were growing. I decided not to take off my character shoes, believing I would never get them back on. My feet were the feet of the Giant. They became a lovely color of purple. Not to be one to complain or miss a party, I went out after the show with the cast, with the help of Vicadin and a couple of Bud Lights. Later, the x-rays showed I had fractured my feet in 3 places. The irony is that I was given many compliments later in the run regarding the ‘cute’ way Granny was walking because of my injury. And so as the old adage goes – the show must go on.
– Mo Monahan, “Granny, Giant’s Wife, Cinderella’s Mother”

I'm one of those people who starts laughing when things get tense. Or when someone falls. So I got a good laugh the night Mo Monahan fell in a heap during the show in her Granny clothes. Unfortunately, I didn't actually get to see the fall (so I don't have the rights to re-enact it), but I got to witness the aftermath. I found Mo sitting in the bathroom, moaning and actually crying some. Now, of course that's not funny, but I couldn't control my laughter when she explained what was wrong. Here's the direct quote: “I fell... I fell out there... I fell flat on my face... in front of all those people, I tripped and fell... flat on my stupid face!” And while I certainly cared that Mo had hurt herself, I nearly gnawed the inside of my cheek raw trying to keep from cackling loudly, as the show was still in progress. Needless to say, Mo spent the remainder of the run wearing a walking cast on her ankle.
– Beck Hunter, “Cinderella’s Stepmother”

New Line's production of Into The Woods had a beautiful set, an extremely talented cast, superb and imaginative direction, a very good band, a masterful score and script, and an anatomically complete Wolf. Karl, who played the Wolf, would dance and move around the audience area (Scott blocked the show using the entire theatre as a stage) during rehearsals in a very provocative way. He would slither and slink and use pelvic thrusts that we knew would be in audience members’ faces. The Wolf's costume was to have a suggestive bulge in the crotch area and everyone thought the pelvic thrusts would be fun for the audience. When the Wolf's costume was delivered, the bulge was more than a suggestion. It was unmistakable proof of the Wolf's gender. Needless to say, the pelvic thrusts took on a whole new dynamic. The script didn't give us any clues about the Wolf's first name, but if I were to venture a guess, I think it would be Dick.
– Steve Johnson, “Narrator/Mysterious Man”

I loved playing Rapunzel and having long blonde hair. Being of Asian descent, I had never pictured myself as a blonde. I even bleached my eyebrows to be more blonde! What I really enjoyed more than anything about Into the Woods was the environment. The entire theatre was transformed into the woods, and the stage incorporated hills and life-sized trees that came alive! It was a spectacular set, and you couldn't help feeling like you were somewhere else, somewhere where giants lurk, witches live, and the big bad wolf could jump out from anywhere. I have to mention a funny-in-an-odd-sort-of-way thing. One time, when I was trying to ask the costume designer a question, her response (with English accent) as she went by was, “You're not to speak to me while I'm walking!” I could hardly believe my ears! Now I love to tell that story, and you have to laugh.
– Kimi Short, “Rapunzel”

All of us girls were crammed into the rear dressing room of the St. Marcus, a room so cluttered and full of bugs, dead and alive, that I refused to take off my shoes unless I was standing on the towel I brought. Beck told me one night that if she were to die young in some freak accident, she wanted me to create a memorial fund for her which would rehab and redecorate the St. Marcus dressing rooms. As New Line is no longer performing at the St. Marcus Theatre, I'm now glad on two counts that Beck is still alive.
– Johanna Schloss, “Lucinda”