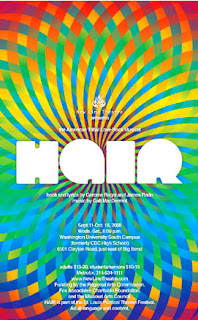 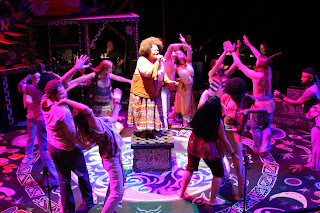 “This is New Line’s third production of Hair in less than ten years, and you know why from the moment you smell the incense. Director Scott Miller has a wonderful feeling for this material; his production delivers the hippie world with sensual precision. It comes through in the exotic aroma, in the eye-popping set designed by Todd Schaefer, in the era-exact costumes by Thom Crain and the dreamy sound of Chris Petersen’s six-man rock band. Most of all, it comes through in the cast, an ensemble known as the Tribe.” – Judith Newmark, St. Louis Post-Dispatch

“Hair at New Line Theatre is unexpectedly, beautifully, joyfully, mournfully, tragically relevant again. Gerome Ragni and James Rado have turned out to be poet-prophets and their book and lyrics are given life by Galt MacDermot’s eclectic rock score. . . I’m happy that New Line chose to produce Hair because I’d never seen it live; I am sorry that it can’t just be a celebration of the 40th anniversary of the show but that it still has so much relevance. See it to celebrate, to mourn, and finally to celebrate again for there is hope and light and no matter how hard ‘they’ try, they cannot ‘end this beauty’.” – Andrea Braun, PlaybackSTL

“Here we are in a similar, but I would say even darker place – at least America still had Posse Comitaus and Glass-Steagall back in 1968. Hair shows us, forty years later, both where the hippies went wrong and where they were right on. And that to abandon the project of striving for equality and justice (even if it doesn’t involve spliffs and paisley) would damn us to our own Greek tragedy. I can’t tell you exactly what happened when the Osage Tribe gathered on stage to sing ‘Let The Sun Shine In,’ but it felt an awful lot like the Holy Ghost, or someone like him, was in the house.” – Stefene Russell, St. Louis Magazine

“Scott Miller knows this material well, and his skilled direction keeps the action flowing and the actors focused. The tribe is well cast, and seem completely comfortable with one another. And they make a marvelous sound harmonizing together on this catchy score. Thom Crain’s costumes add a nice air of authenticity. Chris Peterson’s work on piano and conducting the small ensemble is impeccable. The band provides a solid pulse to this electrified revival meeting.” – Chris Gibson, KDHX-FM

“Hair is not so much a musical as it is an invocation, a sort of vision quest designed to shake you out of your torpor and make you think. Let’s describe it as ‘a group of people with strange clothes and a shared faith in nebulous concepts who make strange proclamations about society’s ills’ – are we describing hippies, the religious right, the secular left or the military’s press conferences on the war in Iraq? Regardless of what you think you are, Hair challenges your perceptions. A kaleidoscopic, mandala-esque painting on the stage provides a locus for the characters to dance and sing and poke fun at the world outside the theater. And there is a lot of fun” – Paul Friswold, The Riverfront Times

“Much smoke is blown, and much adolescent naughtiness is waved like a banner. But just to see the glowing idealism on the faces of fine actors like Khnemu Menu-Ra, Aaron Lawson and others is somehow astonishing in this age of bitter disappointment and gloom, and to hear the folksy and dramatic songs of Gerome Ragni, James Rado and Galt MacDermot raised so beautifully is a great pleasure. . . . For the generation of psychedelic awakening and sexual revolution, this lock of Hair is a sentimental touchstone and a heart-warming bit of modern Americana.” – Richard Green, TalkinBroadway.com 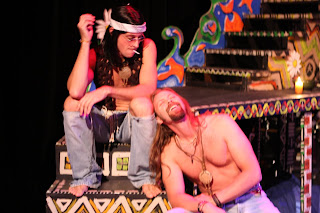 It’s 1968. Or maybe it’s 2008. America is in turmoil. The White House routinely lies to Americans, the CIA and FBI are secretly but consciously ignoring the laws that govern them, and many people worry about the state of our democracy. The country is divided over an unpopular war half a world away, which we’re continuously told we’re winning. They repeatedly tell us they have the enemy “on the run” and that there is a “light at the end of the tunnel.” There are anti-war protests and demonstrations across the nation and on college campuses.

On the warfront, the Department of Defense keeps changing the rules on our military personnel, extending tours and requiring additional tours. They started the conflict with too few forces but have been adding troops without a real end in sight. What does winning mean? When can we leave? Is it even possible to leave behind a functioning democracy? And the Russians invade one of their neighboring countries.

Our national cynicism grows and political satire finds new popularity on television. Many pop music artists and filmmakers also turn their artistic attentions to politics and social issues. The President is extremely unpopular but is not up for reelection. The Democratic presidential primary essentially boils down to the anti-war candidate versus the hawk. The Republicans nominate a candidate that the party’s base does not trust. But most surprising of all, with all this unrest and cynicism comes a renewed faith in the average person’s ability to change our country through the political process. Young people, now a significant voting block, are wildly energized about the election and they line up enthusiastically behind an unlikely presidential candidate, a young, handsome, charismatic Democrat trumpeting a new kind of politics, who is rumored to have taken illegal drugs in his youth. But because of what he represents, some fear for the candidate’s life.

American Catholics are at odds with the Pope over birth control and other social issues. Organized religion in general is experiencing a decline in popularity, as many American turn to alternative philosophies and spiritualities, especially those from Eastern cultures. And there is a growing movement to legalize marijuana.

Many of America’s bigger cities are still largely segregated, despite well-meaning legislation. Race re-takes center stage, as racial violence continues and gun sales skyrocket. White America is repeatedly shocked by sentiments and movements in the black community that have been there for years, apparently invisible to the mainstream. In other words, white people find out what black people talk about when the white folks aren’t there…

Arthur Schlesinger writes in Esquire, “At periodic moments in our history, our country has paused on the threshold of a new epoch in our national life, unable for a moment to open the door, but aware that it must advance if it is to preserve its national vitality and identity. One feels that we are approaching such a moment now.”